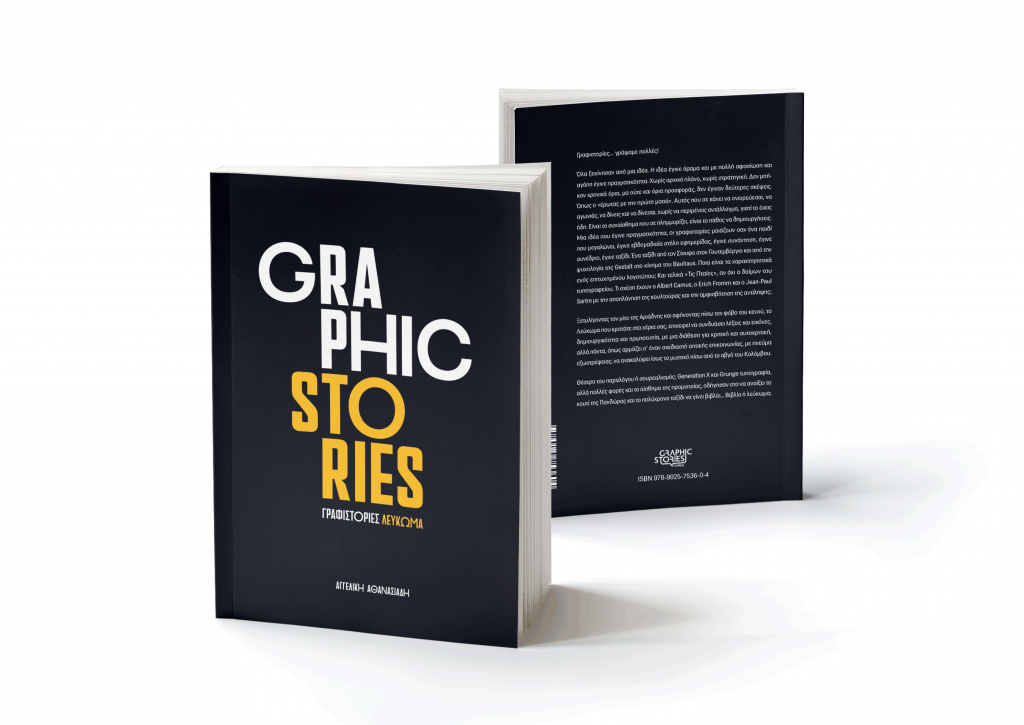 A complete Greek-language “road map” of modern graphic design as it fully covers every basic aspect of visual communication and graphic design.

Payment via
Bank Transfer or PayPal

For more info check our Ordering Guide below

When you complete your payment, please send us an email to graphicstoriescyprus@gmail.com with your order and your address for shipping. We will send out the book as soon as the bank deposit is confirmed.

Due to COVID-19 restrictions we are unable to ship to all countries worldwide.

Please check the list of destination countries in which all the traditional postal services are offered.

“Graphic Stories” is a complete Greek-language “road map” of modern graphic design as it fully covers every basic aspect of visual communication and graphic design.

The book “Graphic Stories” by visual communication designer and author Aggeliki Athanasiadi, gathers 62 theoretical articles on Graphic Arts and Visual Communication as well as 28 interviews of important professionals in the field of graphic design and arts, from Greece, Cyprus and abroad.

The aim of the author is to initiate and familiarize the reader with the basic themes of visual communication and design, the most important principles, theories, faculties, trends and parameters associated with it, causing not only his curiosity but also the trigger for further study and research by the reader. The book “Graphic Stories” is not addressed only to professional designers and students of higher education in the field of Graphic Arts and Visual Communication, but also to high school students as well as to anyone looking for a comprehensive guide to the creative world of contemporary visual arts. “Graphic Stories” can be considered as a modern reference guide, the first and only one of its kind, for graphic arts and visual communication in Greece and Cyprus. 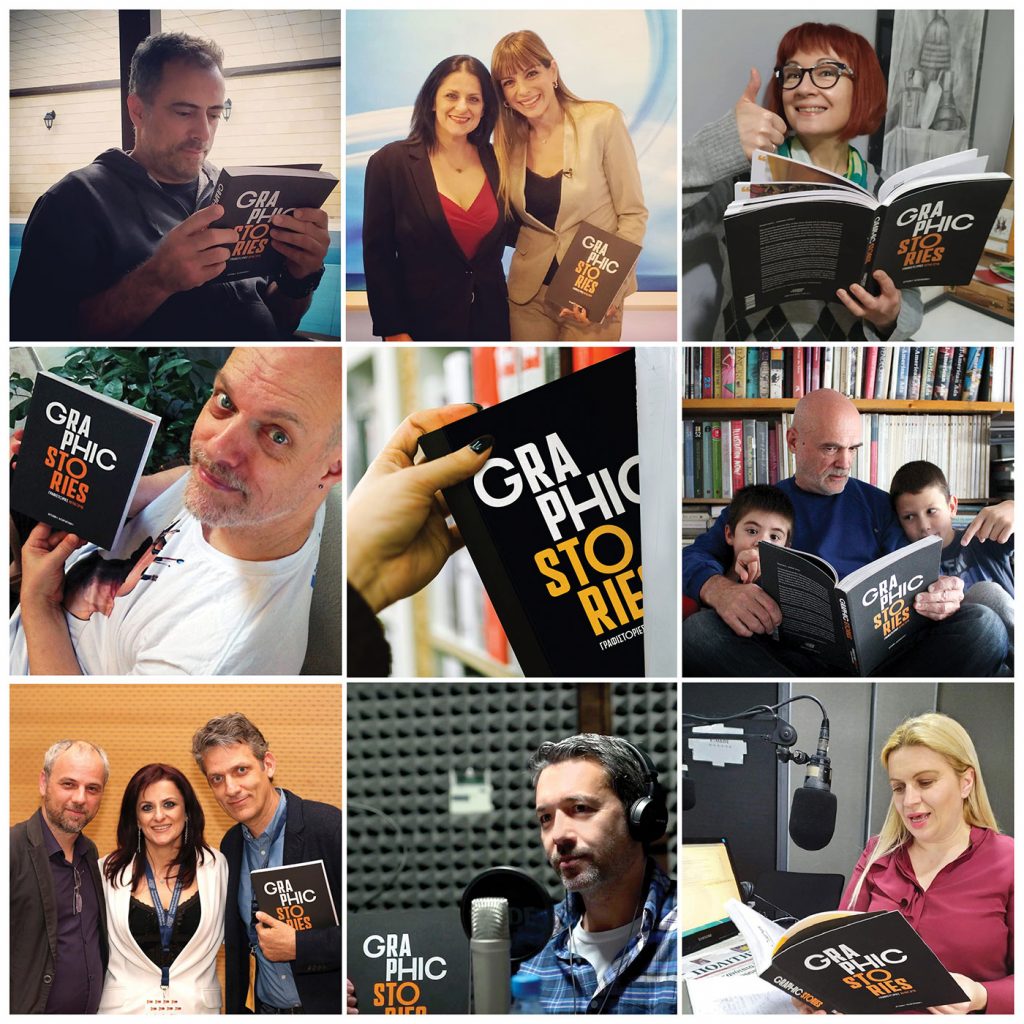 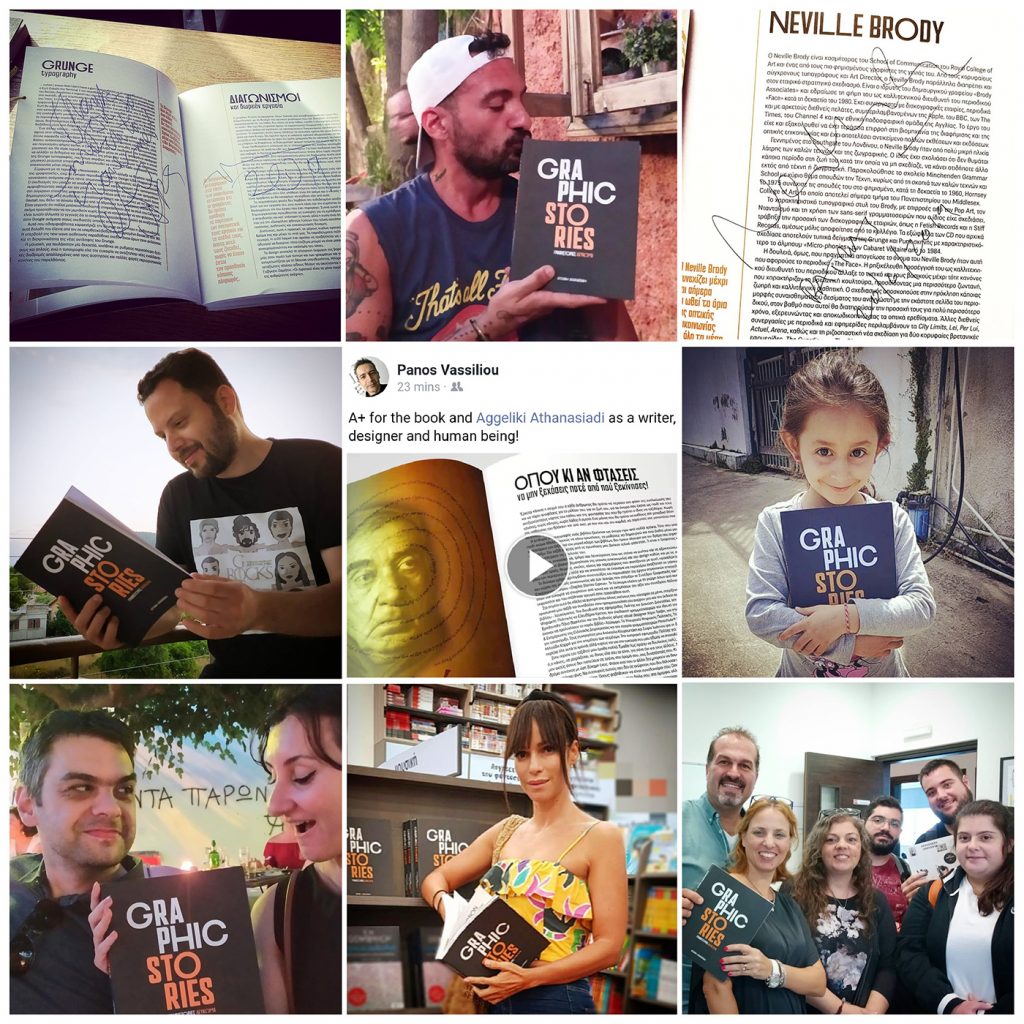 From the back cover of the book

Graphic Stories … we wrote a lot of them!

It all started with an idea. The idea became a vision and with a lot of dedication and love became a reality. No initial plans, no strategy. There were no time limits, no limits on offering, no second thoughts were made. Like “the love at first sight”. The one who makes you dream, gives you anxiety, makes you want to give, without waiting for a reward, because you already have it. It’s the feeling that floods you, it’s the passion to create.

An idea that got flesh and bones, “Graphic Stories” seems like a growing child! It became a weekly newspaper column, a meeting, a conference, a journey. A journey from Sisyphus to Guttenberg and from Gestalt’s psychology to the Bauhaus movement. What are the characteristics of a successful logo? And finally, “Who is to blame?”, If not the printer’s devil. How does Albert Camus, Erich Fromm and Jean-Paul Sartre relate to the seduction of culture and the challenging of the perception?

Unleashing the Ariadne’s stringand leaving behind horror vacui, the book that you hold in your hands attempts to combine words and images, creativity and originality with a mood for criticism and self-criticism, but as always appropriate to a visual communication designer, in a spirit of extroversion, perhaps discovering the secret behind Columbus’ egg.

The Theatre of the Absurdor Surrealism? Generation X and Grunge typography, but sometimes also the feeling of déjà vu, led to the opening of the Pandora’s box and the long journey to become a book … a book or an album? An album, which preserves within its 256 pages the best scent of all these years!

The best moments that wrote their own Graphic Story. 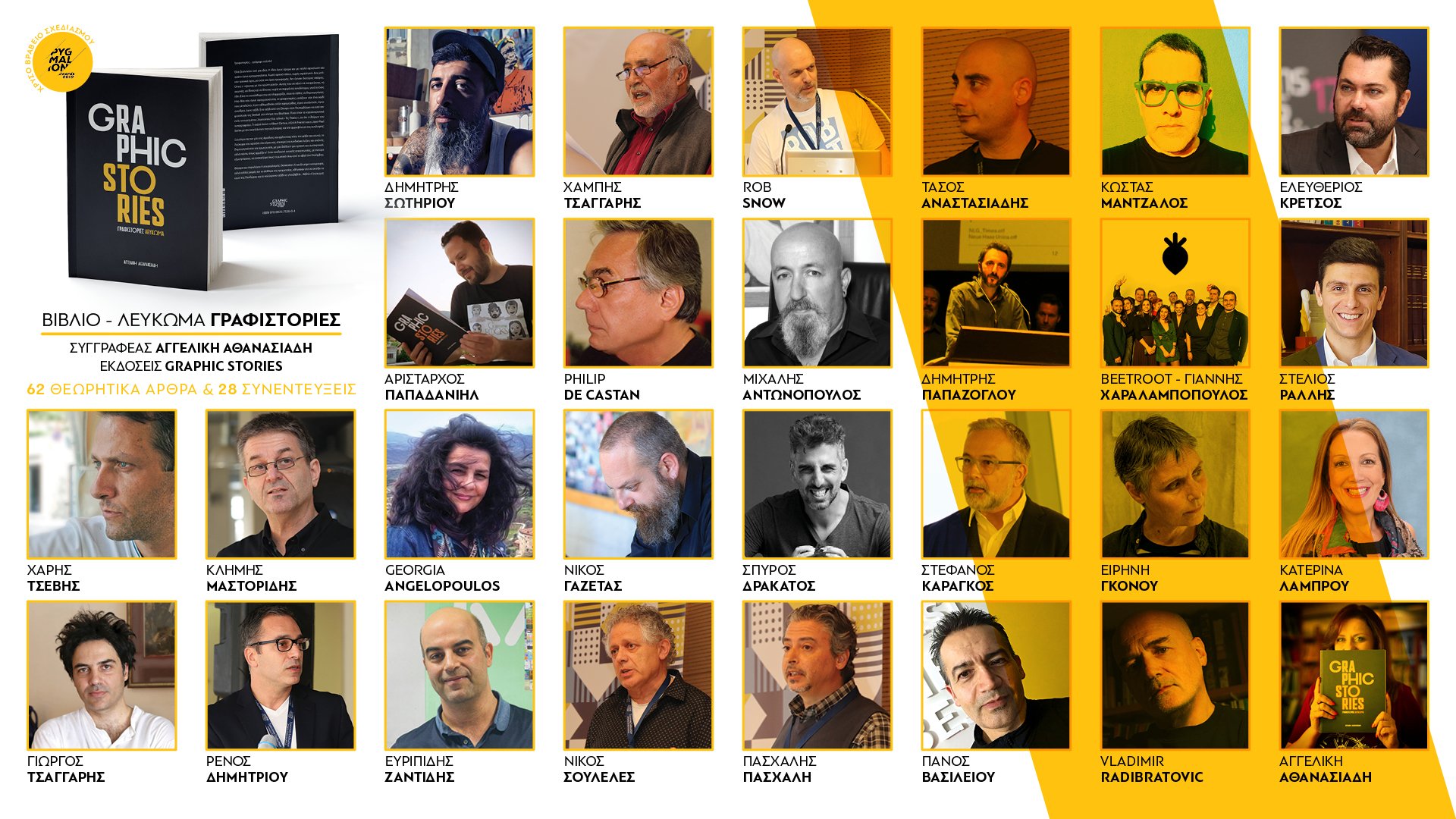 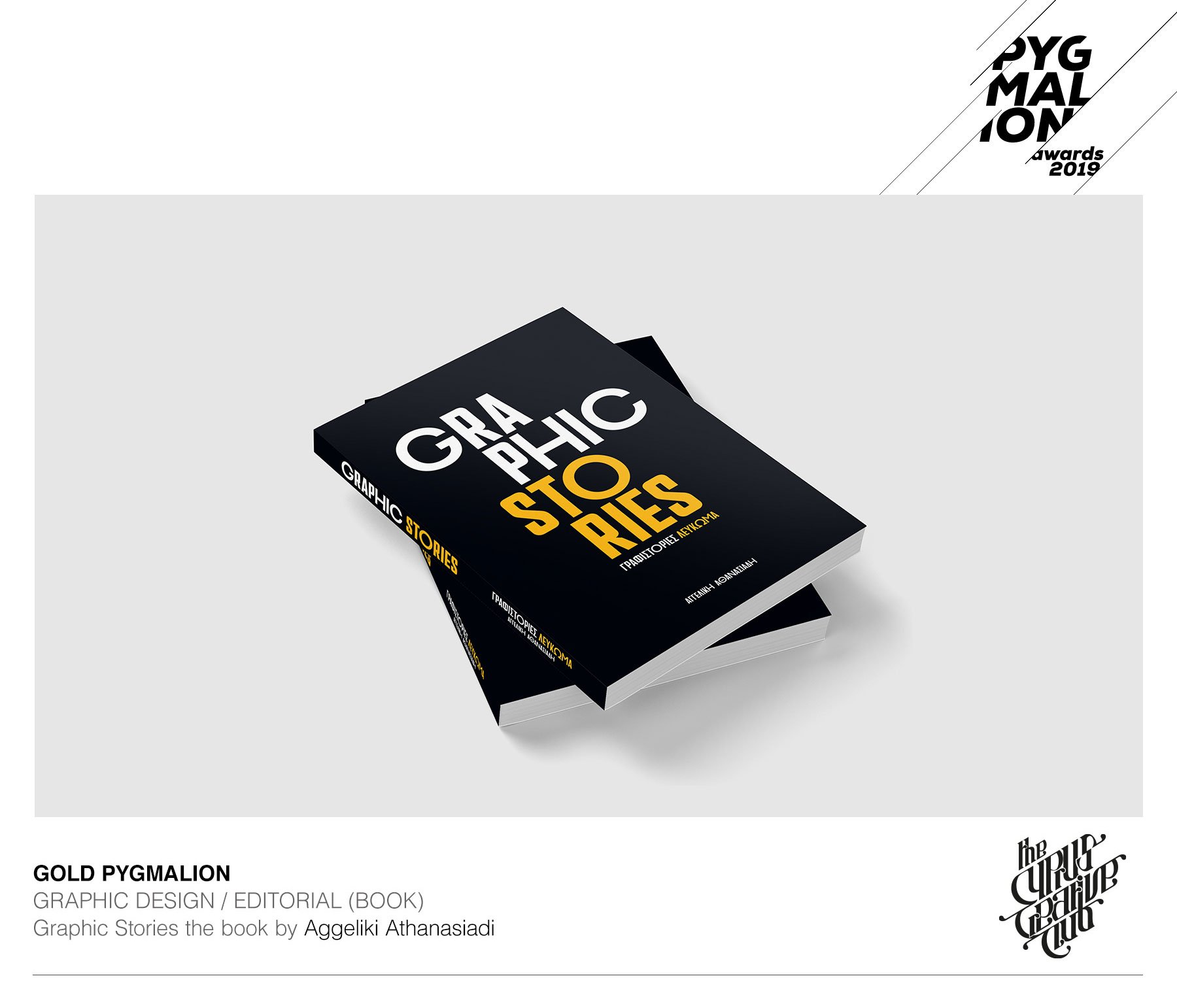 It’s a great honor that the book “Graphic Stories” has been selected by all University institutions in Cyprus, public and private, to enrich their libraries.

At the same time, the Cultural Services of the Ministry of Education and Culture of the Republic of Cyprus, recognizing the cultural, artistic and educational value of the book, has promoted it to the embassies and consular offices of the Republic, internationally.

This publication was supported by the Greek Ministry of Digital Policy, Telecommunications and Media and the Parachute Typefoundry font company.

you can find the book in:

THANKS TO
Everybody that supported and promoted Graphic Stories – The Book: